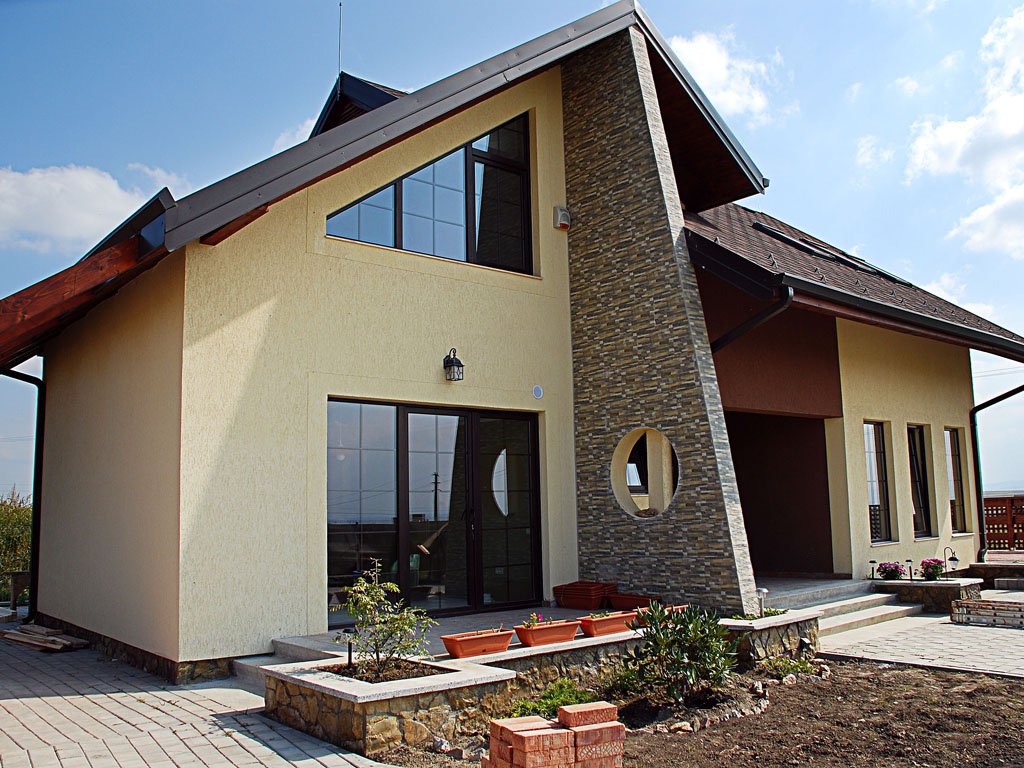 The Pitched Roof Types and Designs of the house performs technical functions, and at the same time is an ornament that can give the house a special and memorable look. Pitched roofs and their structures are complex engineering structures, and the comfort and convenience of the people living underneath will depend on their proper arrangement. The Builder’s Guide provides a clear concept of what is meant by the words “roof” and “roof”.

The roof is the upper part of the house, covering it and protecting it from the negative effects of the environment and precipitation, such as rain, snow, solar radiation, hot and cold atmospheric air, etc. In a broad sense, a roof is a structure that perceives the loads from atmospheric precipitation and wind influences, as well as the weight of its outer layer (top layer).

The roof is the upper element of the roof, its cladding that protects the house from all kinds of external influences. It has technical and decorative functions, representing a kind of reliable and beautiful tent that covers the house.

The roofs are flat and sloping. Depending on the shape of the slope, pitched roofs are

Sloped roofs come in many different shapes: conical, pyramidal, spire, and more. This article will be dedicated to this type of roof. It will help individual developers to choose the appropriate roof Shape structure and competently carry out control during work on its construction. What it will be and what material it will be made of is determined at the design stage. Much depends on the architectural appearance of the facade of the building and the technology of the roof device.

Such types of roofs belong to pitched roofs, in which the roof surface slopes towards the outer walls. Such a device makes it possible for it to rain and melt water naturally.

The angle at which the ramp slopes toward the horizon is called the roof angle. It is expressed in degrees. Most pitched roofs have an angle of at least 5 °. There are times when certain sections of the roof can have a tilt angle of 90 °. The device of the pitched roof and its angle of inclination required for your home will depend on the climate, the general architecture of the house and the material chosen for the final cladding. For example, where there is a lot of rain and the roof is loose (metal), the roof slopes should be steep. Where strong winds often blow, to reduce wind pressure, roofs are arranged softer. By choosing the correct roof pitch, you can reduce the cost of building a house. Steep roofs are more expensive because they require large labor and material costs.

What makes pitched roofs attractive is their diversity. But in any case, you need to carry out high-quality downward-flowing water drainage during melting snow and in the rainy season. Pitched roofs can be equipped with an attic or be without it, and also have a living space in the attic.

Pitched roofs in appearance can be:

The main parts of the pitched roof

The sloping roof design includes two types of basic elements: load bearing and enclosure (we are talking directly about the roof).

The supporting elements of pitched roofs are designed to withstand loads from snow cover, wind pressure and roof weight. With their help, the redistribution of loads on the bearing walls and separately located supports is carried out. All of this imposes higher and more stringent requirements on the strength of the supporting elements.

These include items such as Manuela and the gabled roof truss system.

With their help, the truss receives the necessary rigidity.

Manuela is called a bar, which serves as a support for inclined wooden beams. With their help, the load created by the roof of the house is distributed. It can be noticed as a kind of base for the entire roof structure.

Manuela is arranged in such a way that it can be extended along the length of the building or it can only be laid under the rafters. When the cross section of the beam leg is small in width, over time it may fall off. To avoid this, they use a special rack, which includes struts, racks and crossbarsYou can also use wooden plates made of logs with a diameter of not less than 13 cm. Manuela is laid along the upper edge of the wall, along its axis, as well as towards the outer and inner edges (depending on the structure of the ceiling and walls).

It is better not to place the Manuela less than 5 cm from the edge of the outer planes of the walls. It must be securely attached to the wall, since the ceiling can be compared to a large sail, which, if not torn, can move slightly, which is extremely undesirable.

Laying Manuela is carried out by laying waterproofing material (for example, roofing material) at a height of not less than 40 cm from the top of the attic floor. The angle between the beam leg and the strut should be close to 90 °. When the device of the pitched roof establishes that the rafter leg has a great length, they carry out the installation of additional supports, which are struts based on the beds. Since each link of the Manuela is connected to two links located in the neighborhood and at the same time they are attached to the rafters, the result is a stable and reliable design around the entire perimeter of the roofing system. Manuela can be laid in separate segments under the rafter legs.

When we talk about the roof truss system, we are talking about the pitched roof support structure, which includes pitched rafter legs, vertical racks, and pitched struts. The beams can be made of wood, reinforced concrete, metal and mixed materials. Use fasteners as struts, crossbars, racks, struts, etc. The girders are connected to girder trusses (systems).

For rafters, a bar with a different section is used, this is determined by the length of the rafter legs, the installation step of the rafters and the estimated load (snow, wind) for a particular region.

The beam systems can be with:

About the types and varieties of rafter systems

The design characteristics of truss systems are affected by the location and number of internal supports, the shape of the roof itself, the spacing between the supports, the cargo box, and other factors.

The main element of the rafter system is the rafter legs, which support the box. Usually they are laid along the slope of the roof.

The lattice structure can be equipped with the use of two types of beams: layered, resting with the end and the middle part on the walls of the building.

Hanging-type beams transfer loads to two end supports; The walls of a building can also act as its beams. The legs of such beams can work, both in the direction of bending and in the direction of compression. With its help, a breaking force is created in the horizontal direction, which is very large and is transmitted to the walls. The location of the puffs can be at the base of the rafters and above. The higher the puff, the more powerful it should be. Such a sloping roof, the nodes of which are reliably connected to the rafters, is stable and durable.

Since in hanging rafters the support is carried out only at two extreme points, the tightening that connects the rafters prevents them from separating. When the span is less than 8 m, to reduce the deflection of the beam legs, a crossbar is crashed parallel to the drawing. Hanging beams are used in structures with light walls. Their great advantage is that they can cover long stretches.

Beams of an arrangement type are used in buildings that have an average load-bearing wall, and also have intermediate column supports. They are used when the distance between them is not more than 7.0 m. The rafter legs in wooden houses (in block or pitted) have a support in the upper crowns, in the frame, in the upper fixing. Manuela will serve as a support for beams in stone houses.

Compared to other types of ceiling systems, the ceiling system that uses ceiling joists is easier to install. At the same time, wood is saved, which means that the construction cost is reduced. Roof constructions exist when combined rafter systems are used, when alternating ceiling rafter systems and hanging rafters are interconnected. To increase its rigidity, a frame with struts is installed under the ridge.

What is Steel Pile Foundation? Which is suitable in soils.

TYPES OF APPEALS AND SHORING