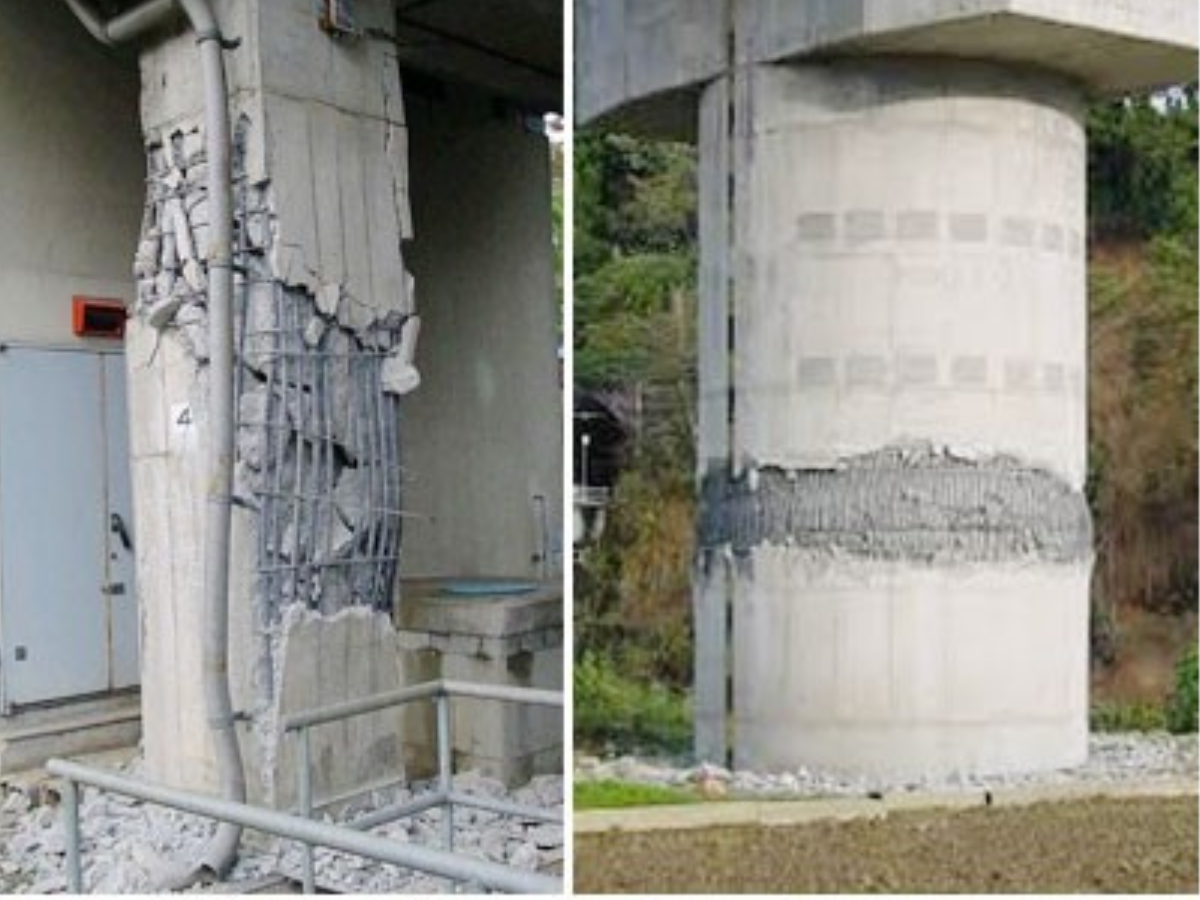 Column buckling is a very unique subject and deserves more of your attention. Column buckling is the only area of mechanics where there’s a different outcome. It starts with predicting how much weight the column can hold and seeing if it can support any more.

In the 19th century, a number of columns were used to uphold the platform of new railway stations. When trains came in and left, the vibrations in the columns began to cause problems. Engineers soon found out that if a column is subjected to compression forces, it begins to buckle and as this process continues, it will eventually buckle all way around.

Deformation in columns when axial load (i.e., compressive) is applied, or we can say that structural member or building elements which don’t support a provided load and experiencee a at once change in its configuration(shape) it is called buckling.

Unstable equilibrium is that when small disturbance (perturbation) is produced it causes large movements and structure never returns back to its original positions, as illustrated in below figure.

Neutral equilibrium is that in when it is no possible to decide for the structure whether it is in unstable or stable equilibrium. When a very little disturbances produce it will cause large movements but structure may be brought back to previous position (original) with no work done.

In stable equilibrium, structure with small disturbance (perturbation) don’t produce large movements, and structure return to original position as soon as disturbance remove. There are two main reasons when equilibrium state becomes unstable due to.

Long or slender column is aa line element which is subjected to compressive load. Buckling is may be in slender column (long column) and in web of beams like channel section, I section etc. Structural members (i.e., beams) may behave as stable structure when tensile loading is subjected to them, they may fail the stress are more the its ultimate strength.

In matter of elements (i.e., column) when it has compressive force, bending effects(secondary) like imperfection in the provided materials or may be in the process of fabrication, eccentric loading which is inaccurate placement of loads, unsymmetrical cross section can cause premature column failure which may be local or global. In this matter failure is bulking.

Here are some types of buckling.

Distortional buckling for the most part occurs for nearly more smaller beams. This is the final product of an exchange between the 2 types of buckling modes. Local buckling and lateral-twist buckling, the two of which are for the most part planned (designee) independently. While distortional buckling happens when the web is disfigured and the flanges turn (twist) and because of this it ends in deflection, the outcome being a low torsional resistance.

When the axial load i.e., compression is applied on the structure members having small torsional stiffens may having great chances of buckling in such a way that its cross section is twisted. It is called Lateral Torsional buckling.

This type of buckling mostly occur in beam of I section, channel section having monosymmetric system. At the point when it buckles the structural beam, it will bend together and consequently deflects. At the point when a pure bending moment follows up on an I-beam about its significant (major) axis, one flange of beam goes through compression and the other goes through tension.

This type of buckling happens globally and impacts the beam is known as globally buckling. Global Buckling can be similarly subdivided relying on the kind of load appearing on the beam and kind of deformation that takes place.

In this axis of structural member does not change, because it happens on a specific part of Colum or web of beams, but the strength beam or column cross section is reduced by the buckling of a component of that structural member.

A beam can buckle in a plane without twisting is called flexural buckling. which may be under moment, axial or simultaneously loading condition. On the off chance that a part of member goes through pure axial load, it might twist in lateral direction and take the state of a sinus wave.

The quantity of waves can fluctuate and is reliant upon end conditions and side (lateral) limitations. This sort of is likewise called the Euler buckling case.

The following factors that cause buckling:

Exorbitant yielding and buckling of reinforcement happen in seriously harmed concrete member i.e., beam and columns. The reinforcement may furthermore have buckled, extended or unreasonably yielded in such members.

The reasons for buckling and yielding of steel in substantial designs happen because of surprising use of burdens for which the part was not designed or because of durability issues in concrete.

Inquisitively, the mechanics of eccentric (loaded) column buckling can be seen additional straight-forward than these of the old-style hypothesis. For, dislike traditional failure of column buckling right here can related to material’s yield strength certainly.

As a matter of fact, it will be demonstrated that underneath conditions like eccentric loading, failure will consistently appear because of stresses surpassing the material’s yield power sooner than the load arrives at its so-called critical value.

On the off chance that a substantial design isn’t safeguarded from the erosive impacts of the components, for example, water and acids, its structure integrity respectability could be compromised, making the whole construction causes buckling and failed.

This happens in regions like foundation and basement, where unnecessary water or dampness gathers. Salt water is especially risky to substantial structures since it can likewise causes rusting the reinforcement inside the concrete structure.

Concrete is especially impervious to compressive or vertical burdens, which is the reason it is utilized generally in footings and foundation. Nevertheless, on the off chance that the load acting on a concrete structure is more then the design load (also called critical load) it will make the structure to buckle under the weight.

The critical load is determined by its cross-section, the elasticity of the materials that make it and the region over which the force is conveyed for the concrete structure or column.

Concrete might be great at enduring vertical loads yet it is relatively defenseless against lateral loads. To that end concrete designs are frequently supported with steel (reinforce concrete), which has integral attributes, less strength on vertical burdens, stronger on lateral forces.

On the off chance that a concrete design structure gets an additional sideway or horizontal forces, it could buckle. This happens frequently during quakes, which incur greater lateral forces on structure.

During winter and summer material expend and contract. For that reason, engineer’s configuration concrete designs with development joints that permit the construction to extend and contract without buckling.

Be that as it may, on the off chance that expansion joints are not embedded, or on the other hand assuming that these extension joints get filled in with unfamiliar material, it could make the concrete structure design buckle when the temperature increments. This frequently occurs with concrete clearing during the warm weather.

It is the length of column (effective, Le) to the minimum radius of gyration (rmin) of cross-sectional area, the ratio of both of these is called slenderness ration. Buckling will take palace where rmin (minimum radius f gyration) if the free rotation at end of column is allowed.

Buckling is mostly in slender or long column. Column is said to be long if ration of its effective length to its least dimension more than twelve (12) then column is said to be slender column. To describe a vertical member this term is frequently used, also its length is greater than least cross-sectional dimension (30 times).

Element of such types failed because of excess later deflection at value of stresses which are much less than the crushing value. Flexures stress are dominant in slender column then the compressive stress.

Euler’s hypothesis of buckling for column was created by Leonhard Euler a Swiss mathematician in 1757.Euler’s guideline of section buckling is utilized to gauge the basic buckling load of section as the stress in the section stays versatile. Euler’s thought is basically founded on certain suppositions referring to axial load application, cross-section, factor of column failure, column material and stress limit. Buckling failure happens when the size of the segment is expanded than its cross-area. Euler’s guideline expresses that the stress in the section because of a direct load is more modest than the stresses due to buckling failure.

I = Moment of inertia

It is the length of the column corresponding to the half sigh wave or length between the point of contra-flexure. For fundamental buckling the Euler critical load depends upon the effective length.

Ratio between the effective length and original length. The Factor K depends upon the end/boundary Condition of the column.

The critical load of as slender bar (columns) subjected to axial compression is that value of the axial load that is just sufficient to keep the bar a slightly deflected configuration.

The importance of structures in construction planed todays?

What are Pitched roof: Internal structure of the ceilings?