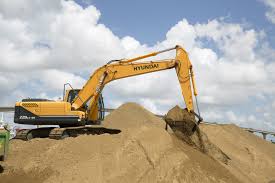 Sand is the most important and basic material in construction. It is used in concrete, mortar, filling, and much more. That’s why the study of types of sand is very important to know the behavior of sand during and after the construction. In this article, we will discuss,

Sand is a mixture of small particles of rock and granular material. It is mainly determined by its size. It is finer than gravel and coarser than silt.

Sand is basically made of unconsolidated particulate material, which is composed of rock fragments or mineral particles, or marine materials. It is mainly made of silicate minerals and silicate rock particles.

Generally, quartz is the most important mineral here because of its high weather resistance. Other common rock-forming minerals have also been found in the sand, such as amphibole and mica.

Heavy minerals such as tourmaline, zircon, etc. can also be present in the sand in small concentrations. But from a higher altitude, most of the sand on the beach is composed of gray or brown quartz and feldspar.

Quartz-rich sand is likely to be ancient (mature) and is far away from the source area, sometimes even thousands of kilometers. It takes a long distance for weathering to decompose the weaker minerals originally present in the rock.

However, the most common mineral in the sand is quartz, also known as silica. This is formed when silicon and oxygen combine. Feldspar is the most mineral found on the surface of the earth, accounting for 65% of terrestrial rocks. When the wind and sea blow up on the coast, they transport these tiny particles to the beach and use this mixture to make up the sand.

Different colors of sand are given below.

Types of sand as per sources

Types of sand as per sources given below.

The desert covers a vast area, mostly between 10 and 30 degrees north and south of the equator. Many of these deserts are at least partly sandy. When we imagine the sand of a desert, we might think of dunes. Dunes cover only 20% of modern desert areas. Dune sand is generally chosen very well. This means that all grains of sand are roughly the same size. There is almost no dust. It was blown away and deposited elsewhere, possibly loess deposits far from the source area.

Sea sand is obtained from the sea. Due to the friction of water, its grins are fine, round, and polished.

Its color is light brown. This type of sand is not suggested to use in construction, because it contains salt material which can be harmful to steel.

This type of sand is obtained from the pit. The grains of this sand are coarse and can be used in construction.

The color is brown and the quality is good. The river sand is naturally obtained from the river bank. Its hygroscopicity is praised for improving structural integrity. Do not confuse it with beach sand, as this material is considered to be inferior to most types of sand in terms of durability.

Types of sand as per minerals and grains

Sand is classified as per minerals and grains, types of sand in this classification is mentioned below:

Sometimes, sand is composed of tiny rocks or very few rocks, so its name is slate sand. Lithological sand is mainly composed of small rocks. This sand and sandstone are said to be stony. Rock sand is an immature sand type. This means that the source rock must not be too far away, and the weathering agent has not had time to decompose these rocks into their constituents.

Sand is usually composed of minerals, but especially marine samples often contain biological debris. There are many pure or almost pure mineral and biogenic sands, but sometimes the two grains of sand are mixed in various proportions to form an interesting type of carbonate-silicate hybrid sand.

Garnet is an important silicate diagenetic mineral, and there are many types of rocks. However, it rarely forms most of the rock. The same goes for sand with garnets. Garnet is a common mineral in the sand, but the quantity is very small. Some exceptions are hard to find-red and very beautiful sand. Garnet is indeed the most abundant sand-forming mineral.

Sand composed almost entirely of olivine particles is rare. Olivine is a common diagenetic mineral in some igneous rocks, but it is very unstable under atmospheric conditions and will rot quickly.

This sand is mainly composed of silica. This is the main element of this type of sand.

Gypsum is a relatively rare component of sand. One exception is a large dune field in the White Sands National Reserve of New Mexico, which is composed entirely of flaky gypsum particles.

Why is gypsum rare in the sand? Because it is moderately soluble in water. Gypsum crystallizes from concentrated solutions and is an evaporative mineral. It can also be solved again easily. Any soluble matter usually does not last long in the sand.

Ooids are small circular accretionary mineralized bodies. They can be called sand grains, but they are not ordinary sand grains. Just like ordinary sand, oatmeal can be up to 2 mm in diameter (usually less than 1 mm). Larger particles that form the same grains as steroids are called steroids

Volcanic ash is a fine mixture of minerals and rock fragments ejected from the volcano during an explosive volcanic eruption. It is so fine that only dark to light gray powder can be seen with the naked eye.

Silicon dioxide or silicon dioxide (SiO2) is a compound composed of one silicon and two oxygen atoms. Quartz is a common mineral with the same chemical composition, but quartz and silica are not synonymous. Certain minerals always have a definite crystal structure, while chemical compounds have no such limitation-just as every piece of carbon is not a diamond. Quartz is made of silica, as are cristobalite, tridymite, and a few other minerals (polymorphs of silica). They are collectively referred to as silica minerals.

Types of Sand with hematitic pigment

Hot sand and sandstone are mainly composed of quartz, but these quartz particles have a strong pink, orange or red color. The colorant in this sand is insignificant in volume-it is hematite (iron oxide), which forms very thin rusty pigments on the larger silicate particles.

Quartz is the most important sand-forming mineral because it can resist physical and chemical weathering. Quartz-rich sand is likely to be ancient (mature) and is far away from the source area, sometimes even thousands of kilometers. It takes a long distance for weathering to decompose the weaker minerals originally present in the rock.

The minerals that make up this sand may be very old. They may have broken away from the source rock millions or even hundreds of millions of years ago and may have experienced several cycles of diagenesis and weathering.

Classification types of sand as per grain size

The size of particles for this type of sand contains in the range of 0.5 to 1 mm.

From 1 mm to 2 mm grains size comes under the very coarse sand.

Types of sand according to ASTM Size

Coarse sand as per ASTM:

Medium sand as per ASTM:

Fine types of sand as per ASTM:

What are steel profile?