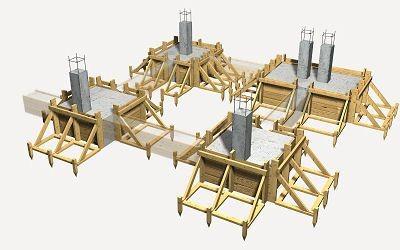 The foundation is a group of structural elements and its mission is to transmit the loads of the construction or elements supported by it to the ground, distributing them in such a way that they do not exceed their allowable pressure or produce zonal loads.

The choice of the type of foundation depends on the mechanical characteristics of the terrain, such as its cohesion, its internal friction angle, position of the water table and also on the magnitude of the existing loads.

There are two main types of foundation: direct and deep.

They are those that settle in the superficial or shallow layers of the soil, because it has sufficient bearing capacity or because they are constructions of secondary importance and relatively light. In this type of foundation, the load is distributed on a horizontal support plane.

Shallow foundations are used whenever possible, as they are the least expensive and simplest type of foundation to execute.

Isolated footings are a type of surface foundation that serves as the basis for specific structural elements such as pillars; so that this shoe expands the support surface until the word passion foot is used to create a pole, for example the name yoga. This is the easiest way to walk, although there is not enough time to bend down the main line, but is a combination of legs or running steps that more than one column is used.

b) Combined shoes or runs

This type of foundation is used when the isolated footings are very close or even overlap. The causes that originate this situation are several: the proximity of the pillars, the existence of strong concentrated loads that can give rise to high differential settlements, the low resistance capacity of the ground or the presence of discontinuities in it. If the number of columns that it supports is less than three, they are called combined and runs otherwise. They are also used to support walls with bearing capacity (load-bearing walls or earth retaining walls), whether or not they have embedded supports, in which case the width of the footing can be variable.

A foundation slab is a floating plate supported directly on the ground. The slab foundation is used as an extreme case of the previous ones when the surface occupied by the footings or by the grating represents a high percentage of the total surface. The slab can be solid, lightened or have special reinforcements to improve the resistance to punching under the supports individually (called pedestals if they are on the slab and reinforcements if they are under it) or by lines (ribs).

In particular, this type of foundation can also be used when designing “offset” foundations. In them, the design of the building includes the existence of basements so that the weight of the excavated land is approximately equivalent to the total weight of the building; the slab evenly distributes the stresses over the entire surface and in this case the expected settlements are reduced. If the building is distributed in several areas of different heights, the proportional distribution of the basements as well as structural joints must be foreseen.

Piles: these are slender foundation elements that are driven in (precast displacement piles) or built in a previously opened cavity in the ground (extraction piles executed in situ). Formerly they were made of wood, until in the 1940s concrete began to be used. The piles have three parts: top, shaft and pile cap or support. Its way of working depends on the nature of the terrain and the depth at which a resistant stratum is found.

Different types of Pile foundation- Their Advantages and Uses

What Are The Basic Types of Foundations.?

What Are The Types of Grillage Foundation and its Installation